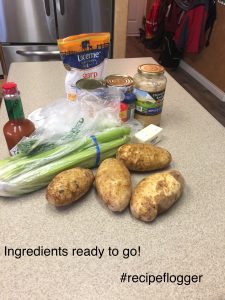 It was a lazy Sunday.  With not much going on, I decided to cook the ultimate dinner for my family.   I wanted something easy (my go to blackened salmon and garlic bread) and something so delicious and good that I would take it to work on Monday for lunch and enjoy every bite.   That something so delicious was Crawfish Baked Potato (http://acadianatable.com/2015/04/20/crawfish-baked-potato/).  Now, given I live in Southern California, crawfish is a little hard to come by.  However, an acceptable substitute is crab, which I always have in ample supply in my p 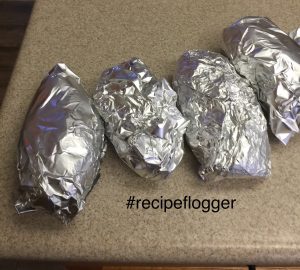 antry.  I love me some potatoes and I love me some crab – s
o my thought was “brilliant!!  This will be my delicious and awesome side dish I can devour at work tomorrow.”

I’ve made a similar recipe from Pinterest about a year ago, for some reason that pin no longer is connected to the recipe.  And, that was a bummer because I made that recipe with no problems and it was delicious.   Regardless, I saw this as something I can accomplish with no problems.

The recipe only had two steps (two steps with a lot of little steps in between, but I get it).  I think the first step is where I failed in this recipe. 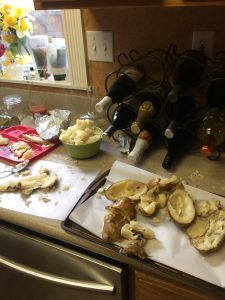 Flogger Fail:  The recipe called for me to punch the potatoes with a fork; slice in half; cover with olive oil; cover in foil; and bake for an hour at 350 degrees.  I did those four simple steps with no problem.  An hour later, I pulled the potatoes out and they were not done.  So, I kept them in the oven about 15-20 mintues longer.   I dutifully took t
he potatoes out and began to gut them without trying to break the potato skins.  Well, I managed to get one full potato (two halfs) out of the four potatoes that I attempted to clean out.  :-/

Flogger Deviation:  I evidentially gave up on the baked potato part of this recipe and decide to shift gears and make crab and potatoes instead. 🙂  I put all the ingredients (onions, cheese, garlic, etc…) in a large casserole dish, just like I would if I was making twice baked potatoes, and baked it along the side of the two measly baked potatoes I managed to salvage. 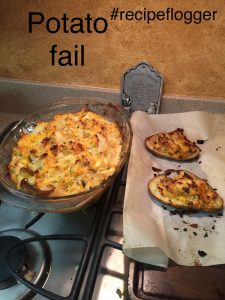 No one in my family knew the difference.  They just thought it was the delicious and awesome side-dish I wanted to make.  There was cheese, sour cream, crab, potatoes, garlic and lots of butter (of course!).  The recipe looked legit with the potato skins included in this dish really tied in the ingredients.

Would I recommend this recipe, of course, anything with crab (or crawfish), potatoes, garlic and butter is a go in my book.

Flogger Tip: I think next time I will skip step one and microwave the potatoes and save an hour of my time.

I am hoping my super delicious awesome lunch makes my Monday even better.